PhD at Creatis and IPNL in Lyon, France

Simulation code: Gate – contributed code to the open source Monte Carlo tool Gate, used for the simulation of photon and particle therapy and imaging. My main contribution is the PromptGammaTLE actor, which speeds up the convergence of the prompt gamma signal by a factor of 1000.

Analysis code: A suite of tools to prepare, read and process Gate inputs and outputs: phd_tools. Since used by other students in their own analyses. 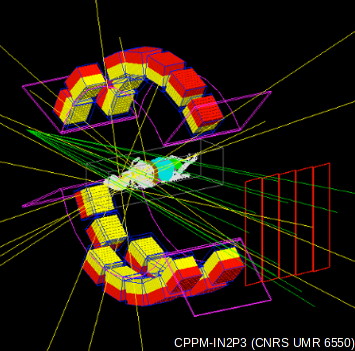 Protontherapy is an emerging cancer treatment method that consists in irradiating tumours with proton beams. Although the proton ballistics, thanks to the Bragg peak, allows delivering high dose to the tumours while limiting the energy deposited in the healthy surrounding tissues, uncertainties remain in the proton range and clinicians generally avoid direct exposure of organs at risk behind the Bragg peak. Recently, prompt gamma ray (PG) monitoring is being studied to overcome these limitations. PG are photons created by nuclear fragmentation of the target nuclei. Contrary to the gamma photons used in positron emission tomography (PET), PG are emitted almost instantaneously and cover a broad energy spectrum (up to more than 10 MeV). The works lead by the Lyon Nuclear Physics Institute (IPNL) and the IBA company (with which we collaborate) has shown that the PG depth profile can be measured with dedicated collimated gamma cameras and give information on the position of the dose distal fall off with an accuracy in the millimetre range, on a spot by spot basis. The goal of the thesis is (i) to investigate how to take full advantage of the information given by prompt radiation cameras and (ii) to optimize the camera design and acquisition protocol in clinical conditions. It will allow to provide recommendations for clinical usage of prompt radiation monitoring systems.